I needed an excuse to try Mike's Vala bindings for Xfce, so I created a new little plugin for the panel, the xfce4-stopwatch-plugin.

In the original release announcement on July 28th, I wrote:

This is the first release of the stopwatch panel plugin, which you can use to time yourself on different tasks. It's stable and usable, but quite minimal still.

The functionality is best summarized with this image from the web site: 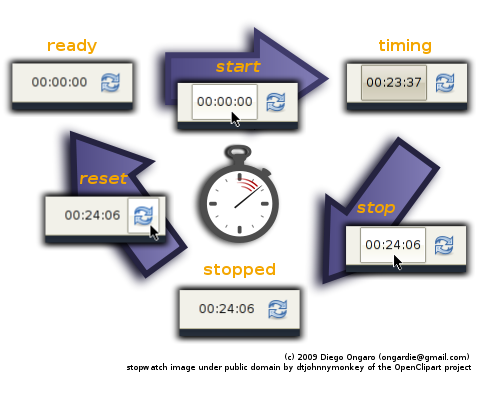 From their web site,

Instead of having to write tons of boilerplate code to create new GObjects in C and for other common tasks in developing GTK-based applications, Vala builds these features into the language. The Vala code you write passes through the Vala compiler, which produces GObject-based C code. From there, GCC compiles that to a binary as usual. There is no runtime, so Vala-produced code can run as fast as hand-coded C.

Vala makes it easy to write fast, object-oriented code for GTK-based projects. With Mike's Xfce bindings for Vala, you gain access to Xfce's libraries from Vala, letting you write panel plugins or other Xfce projects in Vala. It's a cool idea and something I definitely wanted to try.

In general, Vala is pretty easy to write if you've worked with GObject before. I did hit a few bugs while developing even this simple plugin, so it's evident that Vala and the Xfce bindings aren't mature yet:

Despite these hurdles, writing the Stopwatch plugin in Vala has been a pleasure. Admittedly the plugin doesn't do much, but the code is very short and straight-forward.

Stopwatch will probably see just one or two more releases before it's feature-complete. I'd also like to port the Places plugin to Vala at some point, but I'm waiting to see how volume management plays out once ThunarVFS is gone.