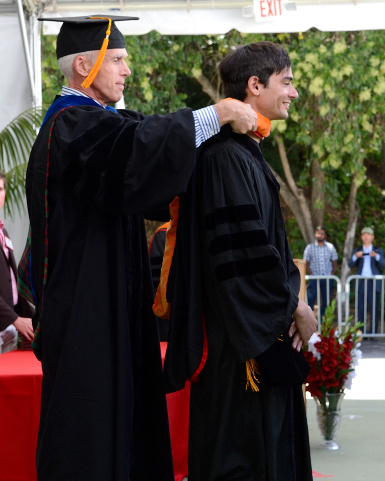 Well, I spent the last five years getting my Ph.D. in Stanford's Computer Science department. I won't do that justice here, but I'll fill in the story briefly so that subsequent posts make sense. I was part of Professor John Ousterhout's group, which is primarily focused on RAMCloud, a large-scale in-memory distributed storage system.

I started working on RAMCloud soon after joining Stanford (Ryan made the first commit the month after I started), and I worked on various low-level parts of the system and master recovery. Eventually, I began to look into eliminating the single point of failure that RAMCloud's coordinator once was, and I became interested in using consensus to solve the problem. (To be fair, I never fixed the problem in RAMCloud; Ankita and John deserve the credit for that.)

I wasn't impressed with the existing consensus-based systems, so I started learning about Paxos, the algorithm that's nearly synonymous with consensus. I struggled through how to build a complete system using Multi-Paxos, and meanwhile, John questioned whether Paxos even had the right approach. He kept pushing on the idea of understandability, to find the solution that's the easiest for someone else to understand. He asked: what's the advantage to agreeing on log entries (slots) out of order if they then have to be applied in order? If the game was understandability, I just couldn't defend Paxos on this question.

Eventually, John went off during a weekend and proposed ALPO, the first version of the algorithm that matured into the Raft consensus algorithm. Raft turned into my thesis topic, and I developed an implementation of it in C++ called LogCabin. Meanwhile, Raft gained significant traction in industry, being implemented in a variety of systems in many different languages, and it's also been taught in a few distributed systems courses already.

Early on in RAMCloud's history, in April 2010, we held the RAMCloud Design Review: a group of friendly people from academia and industry came over to listen to our ideas for RAMCloud and give us feedback. As part of this feedback, we were advised to use ZooKeeper for the coordinator (which RAMCloud eventually did use) and were warned of the "danger in believing one should do Paxos from scratch or optimize it". I think that was pretty solid advice when interpreted as: if you start on this path, it will consume your life. Sometimes, though, getting side-tracked to work on an important problem is the right thing, especially in academia.

Now that I've graduated, I plan to continue to stay involved with Raft and help support the Raft community where I can. I've recently announced my plans to continue developing LogCabin with support from Scale Computing, and I'm excited to see LogCabin mature into a stable and production-quality system. I plan to post articles about this development here on a regular basis (RSS).