LogCabin 1.0 is out! This is the first stable release of the LogCabin coordination service, which includes a C++ implementation of the Raft consensus algorithm. If you're new to these, I recently spoke about Raft and a little about LogCabin at the Sourcegraph Hacker Meetup in San Francisco; watch the video for a visual walk-through of how Raft works. 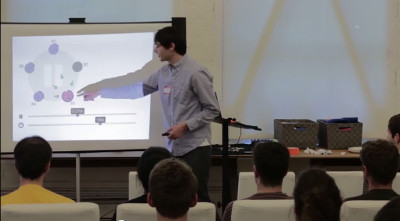 I initially developed LogCabin at Stanford University while co-designing the Raft consensus algorithm with my advisor, John Ousterhout. LogCabin was the system we used to put Raft into code, which in turn influenced the design of Raft and the way we described it. By the time I graduated, LogCabin had a fairly mature Raft implementation but needed more work around the edges. Since then, I've been working with Scale Computing to turn LogCabin into a production system. We've improved its usability, updated how it writes to disk, added a few features such as client-side timeouts, and discovered and fixed a few bugs (for more details, see the series of blog posts). The latest push added rolling upgrades, something we wanted to have in place right from the first release.

Today, we're ready to release 1.0 to the world, and we invite others to give it a spin. LogCabin is written in C++11 and is released under the permissive ISC license.

LogCabin 1.0 also has a logo. A serious project needs a logo, after all. It lets people know they can place their trust in LogCabin.

At a high level, LogCabin looks similar to Chubby, ZooKeeper, and etcd. It's a network service providing a small amount of consistent storage. You can set keys to values in a hierarchical tree, fetch keys, and list the keys in a particular "directory". It supports compare-and-swap style operations, such as set key x to value y but only if its current value is z (actually, you can add a condition to any operation, and it can require that a distinct key have the given value). Every operation in LogCabin is linearizable, meaning that the effect of a write is immediately visible to all future reads, and writes appear to happen atomically and instantaneously.

The above is about all you need for simple uses of a consensus service. There are several other features that we'd like to add in the future; these are outlined below in "Next for LogCabin". Our philosophy is to first get a small but useful system in place with a solid foundation, and looking forward from 1.0, we can start thinking about building out more user-facing features.

LogCabin 1.0 ships with a C++ client library used to access a LogCabin cluster, a few administrative tools, and a command-line interface to access the LogCabin data. See the release notes for exactly what makes up the stable API.

In LogCabin's case, 1.0 means that I think it's ready to be deployed to production. You'll still have to do your due diligence in testing, of course. I think it's stable enough to roll out for production use, and there will be upgrade paths for any data you put into LogCabin moving forwards. I've spent the last few weeks working on internal versioning protocols so that LogCabin will be able to do rolling upgrades for most releases moving forwards. Even if it couldn't (perhaps across some major version bumps), shutting down and restarting a LogCabin cluster with moderate amounts of data only takes a couple of seconds.

While we think 1.0 is useful as is and hope others will try it, there is still plenty we'd like to do. Several higher-level client-facing features are on the wishlist, such as a notification mechanism so that clients can be notified when keys change, ephemeral keys that go away when client sessions are closed, and transactions allowing clients to change multiple keys atomically. We'd also like to better measure and continue to improve LogCabin's performance. If you're interested in helping out with any of this, please get in touch!